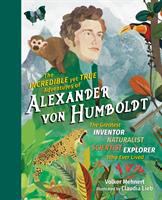 The Incredible Yet True Adventures of Alexander Von Humboldt The Greatest Inventor-naturalist-scientist-explorer Who Ever Lived By Mehnert, Volker Book - 2019
1 - View All Comment

I'm a 72-year-old grandmother who almost three years in South America in my 20s, including 10 months in Peru, mostly Lima but also doing research in Jauja outside of Huancayo and visiting Machu Pichu. I majored in Latin American history in college and knew of the Humboldt (now Peru) current but I had never read up on Humboldt's life and wanted to see if it would be good for my grandsons: ages 5, 8, 10 and 13.

Humboldt led a very exciting life as an explorer, naturalist, and scientist with a great concern for the people where he visited too in the Americas. This book vividly described his adventures and should be very appealing to youth who read it. It is definitely a chapter book, with pictures included to enhance the descriptions. When Huboldt returned from his 5 years in the Americas, he gave lectures.

I'm planning to read The Adventures of Alexander Von Humboldt by
Wulf, Andrea which is a graphic novel I believe, and also recently published.

He and his travel companion saw animals and plants of all sizes unknown to Europeans. He saw active volcanoes and mountains much taller than few European had ever seen. He was shocked how the Spanish conquistadors destroyed a civilization that had been much more advanced that the Europeans and put the natives into harsh servitude, in the name of greed.

People flocked to hear him because his lectures were not dry but exciting and a fascinating way to learn about the world. In his time, because of the instruments he used and the places he dared to travel, he knew more about the earth and the stars than anyone else in Europe. He alos met any scientists on his travels and was in touch with them as they all learned together.

Humboldt was an intrepid explorer and the most famous scientist of his time. He was the first to come up with the ideas that nature is very complex and intertwined and the action of one affects others. He is often referred to as the author of this quotation. But even if he wasn't, it sums up his way of thinking:

"The most dangerous world views are world views of people who have never viewed the world." I heartily agree.

The vocabulary is of a high level, but fine for 4th grade and up. It would be an easy introduction to 6--8th graders on the topic and quite worthwhile to read.