Saved Searches Advanced Search
We're open for NVDPL Express and computer access! Learn more about what is available and what to expect on your visits. Library Update.
Print 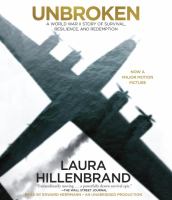 In 1943, while World War II raged on in the Pacific Theater, Lieutenant Louis Zamperini was the only survivor of a deadly plane crash in the middle of the ocean. Zamperini had a troubled youth, yet honed his athletic skills and made it all the way to the 1934 Olympics in Berlin. However, what lay before him was a physical gauntlet unlike anything he had encountered before: thousands of miles of open ocean, a small raft, and no food or water.
Publisher: [United States] : Random House, p2010
Edition: Unabridged
ISBN: 9781101912621
Branch Call Number: CD 940.547252 ZAM NVD
Characteristics: 11 sound discs (14 hr.) : digital ; 4 3/4 in
Additional Contributors: Herrmann, Edward 1943-2014
Random House Audio Publishing

The amazing survival story of Louis Zamperini, an American World War II airman and former Olympic athlete, who endured 47 days in a life raft in the open Pacific, followed by 2 ½ years of starvation and torture in a Japanese POW camp. An engaging and powerful story

The amazing survival story of Louis Zamperini, a U.S. airman and former Olympic athlete, who endured 47 days in a life raft in the open Pacific, followed by 2 ½ years of starvation and torture in a Japanese POW camp.

I am a huge fan of this story. Educational, inspirational and entertaining; what more can you ask for?

I Listened to the audio CD; I couldn't recommend it more.

In 1936, 19-year-old Louis Zamperini of Torrance, California ran the 5,000-meter race in the Berlin Olympics. He finished 8th but was looking forward to the 1940 Olympics in Tokyo. Then World War II began and the Olympics were called off. Zamperini joined the U.S. Army Air Corps and was trained as a bombardier. In 1943, his plane crashed in the South Pacific and the three survivors began an amazing, terrifying journey that included surviving 46 days on a life raft, capture by the Japanese, and nearly two years of brutal treatment in several Japanese prison camps.

There are many things that have stuck in my mind from this book. One is the incredible dangers of the War in the Pacific. Training was hasty and incomplete, and in the first half of the war more planes were actual lost in training accidents than in combat. Airmen in the Pacific, especially the ones flying in the hastily designed B-24s, had more than a 50% chance of being killed. Crashing into the Pacific in a B-24 was usually fatal, and even if some men survived and were able to deploy a life raft, the rafts were inadequately supplied, and survivors were hard to see in the vast space of the ocean.

This is a book that is hard to stop listening to, even as the dangers mount and the torture of prisoners becomes too horrific to tolerate. However, Zamperini’s journey, survival, and self-reinvention make for an inspiring life story. The book was deeply researched and well-written. You will gain a new appreciation for what you likely did NOT have to go through yourself.

Based on many real lives, this author took an amazing amount of information and made a real and flawed human being into the hero, which is what real heroism is! I loved the things she puts in here, like the fact more planes were lost in WW II because of mechanical problems than in actual battle. If you only saw the movie, there is so much more in the book.

Remarkable story but not as well written as I hoped. It read more like an essay to me. I would recommend watching the movie instead.
One thing I appreciated was the focus on the barbaric treatment that the POWs in Japan had to endure. Most WW2 stories and movies seem to centre around the Germans and the Holocaust while the events in the Pacific seem to be largely ignored.

First-person account of WWII on the Pacific front. Incredible story of persistence, brotherhood, despair and resilience. Provided detailed accounts regarding the barbaric treatment of POWs by Japanese soldiers and civilians. Made me re-think a lot about what I felt and thought about WWII. The central and supporting characters are compelling. The authors does get a little over-wrought with the details in parts, but overall it's an engaging read.

It’s 1943 as an Army Air Force bomber crashes into the Pacific Ocean with one survivor, a young lieutenant, the plane's bombardier, Louis Zamperini. This unforgettable true story follows his struggles of endurance to survive on a raft, imprisonment and trial. It certainly shows the testament to the resilience of the human mind, body, and spirit. One of my favorite non-fiction books.

On a May afternoon in 1943, an Army Air Forces bomber crashed into the Pacific Ocean and disappeared, leaving only a spray of debris and a slick of oil, gasoline, and blood. Then, on the ocean surface, a face appeared, Lt. Louis Zamperini. Captured by the Japanese and driven to the limits of endurance, Zamperini would answer desperation with ingenuity; suffering with hope, resolve, and humor. — Jennifer W., Westonka Library

This is well written and inspiring in its way but it is heavy - This is a true story and the main character when through very difficult experiences, even torture. Not to be read unless you are in a good mindset.

Excellent biography about Zamperini, his early childhood and success as an Olympic athelete intertwined with the story of his Military service, internment by the Japanese and how his life was transformed. I especially like Hillenbrands attention to historical accuracy. Like the title says, a story of survival, resilience, and redemption - that these POWs persevered despite their treatment at the hands of the Japanese is a testament to the human spirit.

pink_dolphin_3025 thinks this title is suitable for 7 years and over

jmli thinks this title is suitable for 13 years and over

black_wolf_2329 thinks this title is suitable for 13 years and over

john6573 thinks this title is suitable for 14 years and over

lukeooo2 thinks this title is suitable for 12 years and over

lukeooo2 thinks this title is suitable for 12 years and over

Algonquin_Lisa thinks this title is suitable for 14 years and over

Dignity is as essential to human life as water, food, and oxygen. The stubborn retention of it, even in the face of extreme physical hardship, can hold a man's soul in his body long past the point at which the body should have surrendered it.

“A lifetime of glory is worth a moment of pain. Louie thought: Let go.”

Violence: some parts are grusome.

Violence: Main character's treatment in the internment camp was violent.

Story of Louis Zamperini, started as an Olympian when WWII starts and Louis enlists in the Air Force.